Three Stocks To Watch As Natural Gas Prices Bounce Back

After prices hit decade-lows due to a stubborn supply overhang, natural gas markets appear to have finally reached a turning point. Buoyed by strong cooling and industrial demand due to an extraordinarily hot summer in the western part of the United States as well as economies gradually emerging from lockdown, natural gas prices have surged 49.1 percent over the past 30 days to trade at $2.65/MMBtu, a level they last touched in November.

Meanwhile, injection into natural gas storage clocked in right in-line with the consensus but well below the year-ago average builds, thus easing worries of waning demand. EIA data for the week ending August 21 shows that natural gas stocks increased by 45 Bcf versus expectations of 43 Bcf injection by Natural Gas Intelligence (NGI); a median of 44 Bcf by a Bloomberg survey, an average 46 Bcf injection by a Wall Street Journal poll and a 47 Bcf build by a Reuters poll.

Stocks of natural gas companies have been rallying in tandem. The sector’s favorite benchmark, the United States Natural Gas Fund ETF (NYSEARCA:UNG) has surged 33 percent over the past 30 days, easily outperforming the United States Oil Fund, LP (USO) with a 4.7 percent gain over the timeframe. 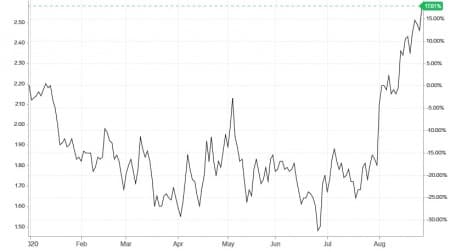 Over the short-term, natural gas demand is expected to moderate with temperatures expected to fall to the 60s to 80s range, thus impeding cooling demand. This could lead to a temporary correction in prices though the EIA still expects winter heating demand to trigger another wave of upward price pressures. The EIA has forecast Henry Hub natural gas spot average prices of $2.03/MMBtu in the current year and $3.14/MMBtu in 2021.

Given this backdrop, it might not be too late to capitalize on the natural gas rally over the coming months. Here are our top picks:

Pennsylvania-based EQT Corporation (NYSE:EQT) is a leading independent natural gas producer with less exposure to oil, thus making it a good stock to track natural gas prices. EQT is up 16.6 percent over the past 30 days and 47.9 percent in the year-to-date.

EQT has new management in place that appears to have a good handle on the natural gas business. One year after taking over at the helm, the company’s management recently celebrated its one-year anniversary by highlighting its achievements including Q2 sales volumes of 346 Bcfe; 21 Bcfe above midpoint of guidance, capital expenditures of $303 million, a good $163 million lower compared to the prior year’s comparable quarter, well costs of $680 per foot in the Pennsylvania Marcellus thus exceeding the set target by $50 per foot, reduced total debt by $417 million during the quarter and received $190 million in tax refunds.

Related: China Looks To Dive Into The American EV Market

Further, EQT has reported that all 1.4B cfe of natural gas production in the Appalachian that it had curtailed in May at the height of the COVID-19 lockdown has fully returned with no recorded degradation to well performance.

Williams Companies Inc. (NYSE: WMB) is an operator of pipelines and other midstream assets with a focus in the Northeast, where it serves Marcellus Basin natural gas producers.

WMB is one of the leaders in the midstream space with minimal exposure to commodity prices since it generates nearly all of its cash flows from fee-based sources.

Most of the company’s customers appear to be in little danger of going bankrupt, with the firm having lowered its exposure to embattled Chesapeake to 6 percent from 18 percent a couple of years ago. Further, management has expressed confidence in its ability to defend the integrity of the company’s contracts.

Williams has continued to exhibit relatively strong performance during these trouble times, reporting a 4 percent Y/Y growth in adjusted EBITDA to $1.26 billion and a 10 percent increase in discounted cash flow to $861 million despite incurring a net loss of $518 million.

Recently, WMB committed to a 56 percent absolute reduction in greenhouse gas emissions from 2005 levels by 2030, thus putting it on a positive trajectory to achieve net-zero status by 2050.

With a dividend yield (fwd) of 7.63 percent and a low short interest of 1.54 percent, WMB is one of the safer midstream energy plays. WMB has gained 11.9 percent over the past 30 days but is still 1 percent down in the year-to-date.

Clean Energy Fuels (NYSE:CLNE) is a provider of natural gas as an alternative fuel for vehicle fleets in the United States and Canada.

Clean Energy Fuels sells renewable natural gas (RNG), essentially the only zero-emission truck fueling option available in the market today. The company’s hottest product right now is Redeem, an RNG diesel substitute. CLNE’s modus operandi is quite unique: The company captures methane from big GHG emitters like landfills and dairies and then processes it into RNG fuel with the entire process often carbon-negative.

With companies with big truck fleets trying to lower their carbon footprints, the demand for Redeem has skyrocketed. For instance, in 2019, UPS ordered 170 million gallon-equivalents of Redeem. CLNE has also struck an RNG partnership with Chevron (NYSE:CVX).

CLNE has endured its fair share of hard times, too.

As a major nat gas producer, the company was recently forced to issue secondary shares in a bid to pay down its debt due to low commodity prices. Nevertheless, the COVID-19 pandemic has actually been a boon for the company as investors have been rewarding renewable energy companies. CLNE stock is up 13.1 percent over the past 30 days and 18.4 percent YTD.

The company is one of the few in the energy sectors that are still turning a profit in this dire market. CLNE reported a Q2 net profit of 33.07M, while revenue increased by $86.01 million.

By Alex Kimani for Oilprice.com

Read this article on OilPrice.com

This story originally appeared on Oilprice.com